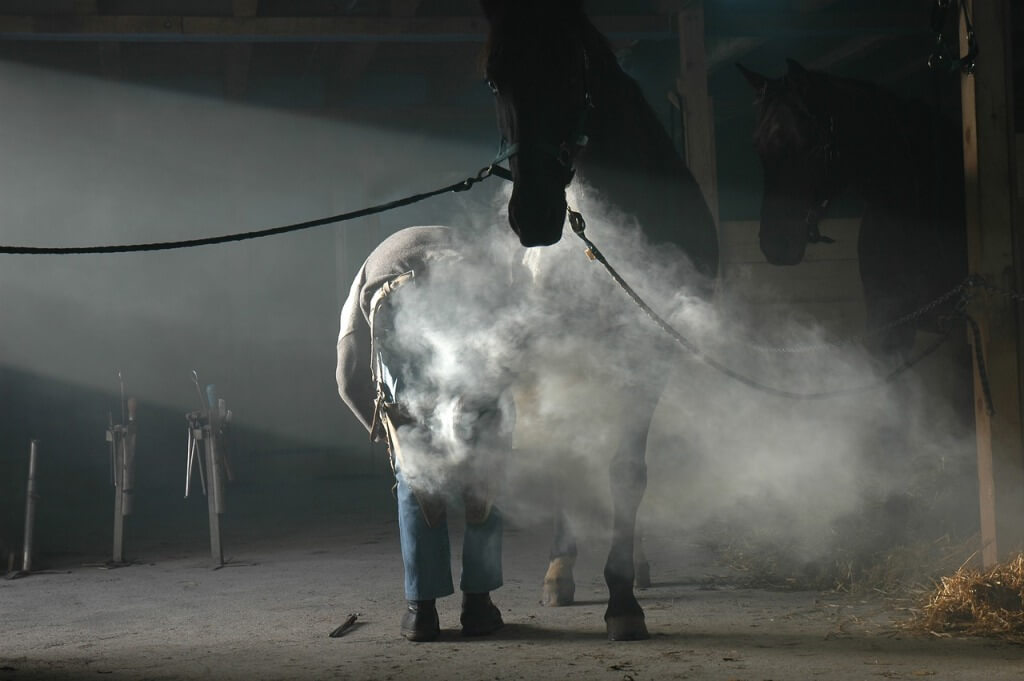 For more than 9 million horses that exist in this country, there are only a surprisingly modest amount of hoof care professionals. Recent surveys suggest that the number of farriers is as low as 25,000. And, despite this alarming fact, after centuries of ever-changing ideology regarding the horse and its increased popularity with the public, one constant still remains–the need for more qualified hoof care specialists. To tell the story of how the farrier has come to be, is relatively simple. As many would say, “farriers were born out of necessity.” During the initial development of our society, the horse was instrumental and the care of him indispensable. Thus, the role of the hoof care provider (farrier) was born. As our industrial demands increased, so did our need to convert our raw materials into usable ones. Horses were called upon to be our “partners in labour” and their care was vital, so that we might enjoy the fruits of all that hard work. In those days, anyone having talent in the areas of horsemanship and horse care was a major asset for the success of all young and developing societies. I suspect that the historical perspective makes sense to most of us and it’s not really a subject that is questioned all that often.

But what about the word farrier? How was that term coined? This seems to be the object of some confusion. Throughout our history, farriers have seen more changes in their job description than they have in their actual craft practices. Logically, this leads many inquisitive people to ask the following twofold question: What exactly does the term farrier mean and why is it that today’s farrier has ended up with so many aliases? Perhaps the best I can do to answer this question is to offer a few suggested theories. First, let’s begin with Webster’s interpretation. To my surprise, I found their definition to be somewhat ambiguous. It reads as follows:
“…(n.) a blacksmith; (British n.) a veterinarian.
(Latin forms: ferrum, meaning iron; ferratus, meaning iron-shod)”

In reality, even though a farrier will study the skill of smithing iron, as well as the anatomy and medical concerns involving a horse’s foot, there are many aspects of blacksmithing and veterinary medicine that are not applicable to the craft of horseshoeing. If we are to rely solely on Webster for the definition of the term farrier, it leads us to the conclusion that it must be an umbrella title for both professions. However, this is quite the contrary.

Most historians can provide us with a bit more intelligence. During the time of William the Conqueror (1066 A.D.) Norman noblemen invaded England and with them came a most trusted “master of all the kingdom’s horses“; his name, Henry de Farrariis. Many believe that the English dubbed the term farrier to include anyone in charge of the care of horses, particularly the care of their feet. In other accounts, it has been documented that the family name, Farrariis, was taken from a French town, situated near the southeastern part of Paris, called Ferrieres. This town was widely known for its plentiful iron mines and those iron craftsmen who prospered. As time and tradition passed, those craftsmen were called “ferriere.” Later to become shortened and re-titled “ferrer.”

With such an array of uncertainty as to the truest form of the term farrier, one thing is for certain. Those who have assumed this title carry with them a long-standing tradition of being a powerful influence on the quality of life for all horses that are in their care. All farriers carry this awesome responsibility and it should never be taken lightly. In my view, the mere diversity of this title serves as a constant reminder of how important the job of a farrier actually is and it should always be a title that signifies pride, as well as distinction.

From the “Farrier-Friendly™” article series  by  Bryan Farcus. If you’ve enjoyed Bryan’s articles in magazines or online, you can now purchase them in paperback at: www.amazon.com. You can visit Bryan on the web at FarrierFriendly.com. ©2002 Bryan S. Farcus, CF.