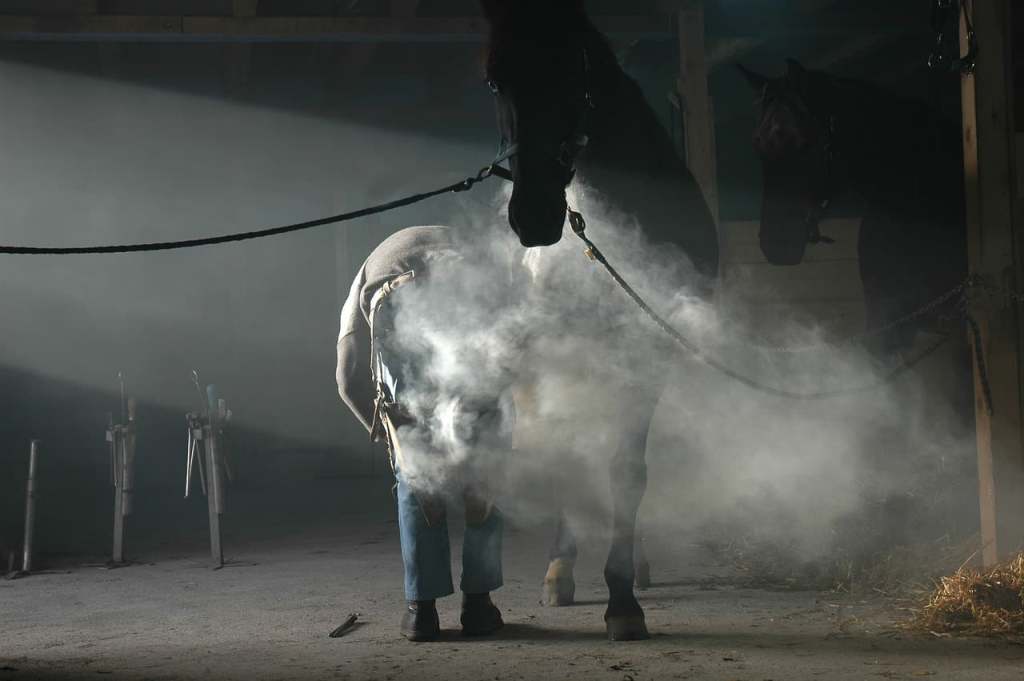 My horse sprung a shoe—do I call the farrier? The blacksmith? The local horseshoer? Do they do different things or just go by different names? Like most things, the difference is in the details.  Here’s what the terms really mean. In the Oxford English Dictionary, a “horse-shoer” is:

One who makes horseshoes, or shoes horses.

The earliest written use of this word is in Francis Sparry’s 1591 translation of C. de Cattan’s Geomancie, where he speaks of, “Craftsmen working by yron, as horse-shooers, locke-smiths, and such like.”

“Blacksmith” is a term that comes out of the word “smith,” meaning:

One who works in iron or other metals; esp. a blacksmith or farrier; a forger, hammerman.

It’s obviously a word we still use today (locksmith, goldsmith, etc), but the term “smith” is quite old, predating “blacksmith,” and first appearing in English in about 950 A.D. in the Lindisfarne Gospels, (specifically Matthew 13:55, where the word smiðes stands in for carpenter—i.e. a person who makes things). The word also makes an appearance in the epic Beowulf.

A blacksmith, then, according to the OED, is specifically:

A smith who makes and repairs iron articles by hand.

This term first appears as a profession in Richard III’s 1484 Rolls of Parliament, where he refers to “blaksmythes” alongside bladesmiths and goldbeaters as “artificers” of the realm. There was even a Worshipful Company of Blacksmiths that was incorporated in 1571 and was one of the Livery Companies of London. The Blacksmiths’ Company housed a lot of different crafts, though. Farriers who made horseshoes were part of the guild, but they were just one branch. The Company also included gunsmiths, armourers, clockmakers, and also, at an early point, tooth-drawers, so a blacksmith might not have anything to do with horses. Nowadays, the work of a blacksmith is pretty specialized, since machines make lots of the metal objects that blacksmiths used to make. Nevertheless, traditional blacksmiths (who may or may not make horseshoes) are still alive and kicking.

The Oxford English Dictionary definition of “farrier” is:

One who shoes horses; a shoeing-smith; hence, also one who treats the diseases of horses.

According to the OED, the earliest usage of the word “farrier” is from a 1562 English Act of Parliament, where Elizabeth I refers to “The..Crafts..of..Smiths, Farriers.” In England, farriers got a Worshipful Company all their own (which still exists), having started out as a Fellowship in 1356 and incorporated as its own company by Charles II in 1674. 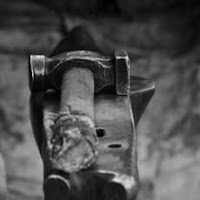 The term “farrier” has always been closely associated with the term blacksmith, as you can see if you trace the name. Farrier comes from the Middle French word ferrier, which comes from the Latin ferrum, meaning “iron.”

Historically, the farrier was also used to treat medical problems when they arose. Farriers were an important part of the military of medieval cultures like the Normans, travelling with armies to tend to all aspects of the horses’ care. It wasn’t until the late 18th century that the job of treating equine illness was given over to the emerging profession of veterinary surgeons, according to the “Evolution of Military Veterinary Medicine, 1775-1916.”

It was expected that shoeing would be a part of a farrier’s job, but that a farrier would do more than make and put on shoes. This is still true today. A farrier (well…a good farrier) is an expert in hoof care, which is about more than just trimming and shoeing a horse’s foot. The farrier has to learn about equine anatomy, biomechanics, physiology and basic lameness and health issues, meaning the farrier learns some of the same things as a veterinarian, even though their jobs have diversified.

So to sum it all up, farrier work is a kind of blacksmithing and blacksmithing is a kind of farrier work. A blacksmith might limit themselves to making shoes and tools, but might also be able to put those shoes onto horses. A farrier might use prefab shoes and tools in their farriery work, but then again, they’re often able to make their own. It all depends on the kind of training they’ve had. Some blacksmith schools are just about smith work, but offer the option of farrier forge work. Most farrier schools will have some training in making shoes.

In Britain, it’s actually illegal to call yourself a farrier if you haven’t had any farrier training, but in North America, even blacksmiths/farriers will use the terms interchangeably. When you’re calling someone in to do work on your horse’s feet, the name the person goes by will probably, in the end, be less important than the experience and qualifications they come with.