As a concept, the horseshoe goes back thousands of years. While the first shoes used by ancient Asian and then Roman riders were made of leather, the technology developed over the centuries to include metal. By the year 1000 A.D., nailed-on cast bronze shoes were common in Europe, and by the 14th century, iron shoes were generally in use. Like every other kind of technology, the fastest changes have been seen in the last century, and we now have access to shoes of a variety of different materials, shapes and functions. If you’ve ever wondered why shoes are made of what they’re made of and what benefits there are to each material, here’s a quick rundown of the kinds we see the most. 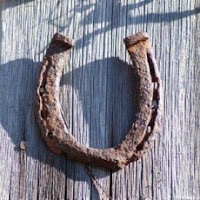 Most conventional shoes are made of steel or aluminum. The choice of material is determined by the function of the shoe itself, as well as the horse’s job. The material is thought to have a big impact on the horse’s way of going and its performance. Steel is obviously heavier, but it’s also sturdier, while lightweight aluminum shoes tend to have to be replaced more often. The surface that a horse works on is crucial in deciding what metal to put on. Heavy horses that are driven or worked on pavement need a more hard-wearing shoe. Horses who do a lot of high impact work and work on trails also benefit from a sturdier steel shoe, especially because aluminum is more bendable, which is not a quality you particularly want if your equine friend steps on his shoe when you’re 15 miles from home. Horses who spend a lot of time in soft footing obviously don’t have to worry so much about this consideration. There are some manufacturers who make a rubber-coated steel shoe, which has the benefits of more grip and more cushioning for horses who spend long days on roads or on other hard footing.

Science has shown that steel shoes tend to accentuate knee action, while aluminum shoes tend to allow the horse more stretch through the shoulders (check out a summary of the research here). This factor is especially important for show horses, who are often required to move a certain way when they perform. Disciplines that like a lot of knee action tend to prefer steel, but those that like a long, low movement that comes out of the shoulders favor aluminum. That said, there are plenty of professionals out there who argue that the material of the horseshoe isn’t nearly as important in determining a horse’s way of going as conformation, biomechanics and the way the horse was shod.

The structure of the hoof will also play a big part in what kind of shoe the horse can wear. Thin-walled hooves aren’t as conducive to heavy steel shoes as aluminum ones, since the greater weight of the steel shoe will put more stress on hoof. That said, because steel shoes wear down less quickly, horse owners have often found that they can get away with having their horses re-shod less frequently, so there are fewer nail holes and less damage that way.

Plastic shoes have been on the market for the past 20 years or so and are usually made with some kind of polyurethane compound. Manufacturers claim they reduce concussion, improve traction and are more natural to the horse because they’re lightweight and flex with the foot. Although people reported lots of problems with earlier versions of this technology (like premature wear and tear and slippage), designs are advancing every day. Like metal horseshoes, they come in a variety of shapes to support different parts of the hoof structure, and manufacturers are keen to claim that their shoes are more therapeutic for conditions like navicular, ringbone and the like. They go on in the traditional way, but can often be glued, which means no nail holes in the hoof wall, which is a bonus for horses who have thin walls, or little hoof to nail to.

Most recently, shoe manufactures have sought to solve some of the typically encountered problems with plastic shoes by making them out of a number of different materials like polyurethane meshed with steel. These shoes are touted as being an improvement over earlier plastic shoe designs in that they’re lightweight but stable, and they’re also said to do less damage to the horse’s foot when they’re put on (especially because they can be glued). Like regular plastic shoes, they come in a range of shapes, with some that offer a lot of padding and coverage for the sole.

This new technology uses a synthetic replication of the horn of a horse’s hoof and casts it onto the hoof itself. They can also contain flexible metal segments to stabilize the shoe. They’re used for horses who can’t wear conventional shoes or who tend to lose shoes easily. It requires a specialized kind of work and not every farrier will be able to do it. This kind seems still to be in its infancy, but given the way technology rolls, it probably won’t be long before we’re hearing all about it!

The Horse's Hoof: 7 Major Parts and 6 Signs of Problems