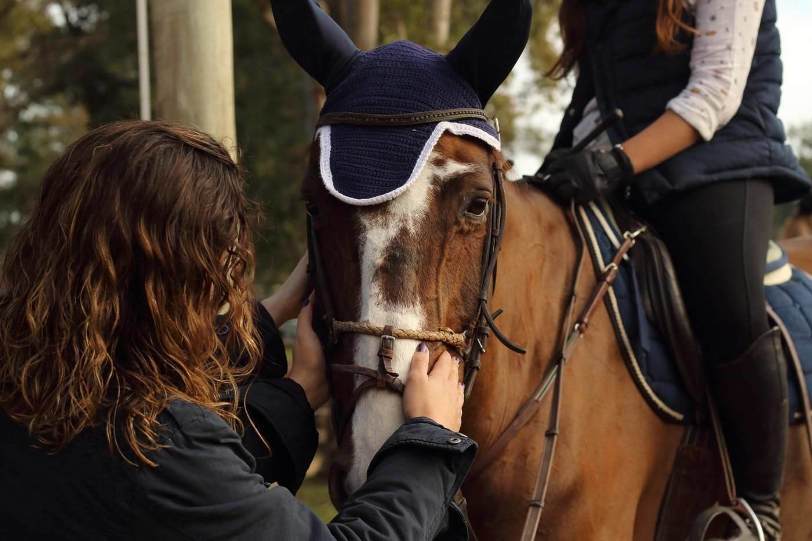 There are so many things to take into consideration when buying a horse – not just their feet. Whether you’re getting your eight-year-old daughter her first pony or you need a younger warmblood so you can retire your trusty old dressage horse, I’d recommend a vet check. You should also talk to your farrier and ask if you can talk to the seller’s farrier, too. They should be open to everyone talking to each other.

A Word of Caution

When you go and meet the potential new addition to your herd, the first thing you should watch is the horse’s ears. Are they alert and moving and listening? If they’re droopy and moving slowly, there’s a chance the horse was sedated before you got there.

A few months ago, my friend brought me along to get a second opinion on a horse they were buying for their daughter. The horse let me do what ever I wanted with all four feet. My friend bought the (as it turned out, sedated) horse, super cheap, and is still trying to train it to pick its feet up. Seriously. Watch the ears first.

Check out the Conformation

The next thing you should observe is the horse’s conformation. Does everything look straight and even? Are the legs straight and all four feet pointed point forward? That will be a big factor in how evenly it wears its feet down.

If you stand directly behind the horse so you can see the spine, withers, shoulders and hip muscles, you should be able to see if the spine is straight and if the muscling is relatively even.

Horses are like humans, right or left-handed, so the dominant side will obviously be a little more muscled, which isn’t necessarily a deal breaker. Depending on the breed, they’re also either front or rear wheel drive. If one side is a lot more muscled, the horse might be wearing the dominant hoof down more than the other three.

Look Closely at the Hooves

Now we get to the feet. Does the horse have shoes on? If not, are there nail holes in the hoof wall to suggest there used to be? Are there any cracks? If so, look and feel around the hair line at the top of the hoof for dents, bulges or old scars. An old injury could leave a permanent, unfixable crack that more often than not just looks bad, but doesn’t hurt or affect anything.

Are the front toes round or are they worn down straight across? Does the straight toe of the hinds point directly forward or is the line off to one side? This could mean a couple things. Their farrier could have trimmed or shod the horse like that to help give it a better, faster break over or to correct a conformation problem. Or the horse could be dragging its feet when it walks, which usually means the horse is either sore somewhere or just lazy.

What do the lines around the outside of the hoof look like? Thin, shallow lines running straight around are normal growth rings. Thick deep lines usually means something major (in the horse’s eyes) happened in the past year. That could be anything from a change in feed to being moved somewhere new to its pasture buddy being taken away.

If the lines drop down to the ground at the heel, the horse could have foundered at some point in the last year. Another way to tell if it has laminitis is to clean out its feet. You want a hard, concave sole and a thin white line. A bulge in the sole between the point of the frog and the toe, or a stretched out toe and stringy looking white line are signs the laminitis hasn’t grown out yet.

Get Lots of Opinions

If at all possible, bring a friend with you when you check out a new horse, preferably someone with a little horse knowledge, who can give you a second opinion. When you’re buying a horse, ask the seller lots of questions and make sure to talk to your vet and farrier.

This is our monthly feature, “Ask a Farrier,” a Q and A with farrier Karen McMann. Karen has been a full-time farrier for 17 years. She graduated in 2002 from the Canadian School of Horseshoeing, where she studied under Pat Cullen. She serves on the Advisory Board of Equi-Health Canada and Equi-First Aid USA as a Farrier/Hoof Health Support specialist. Karen lives and works outside of Okotoks, Alberta.

If you have a question you’d like to ask a farrier (about horseshoeing, farriery, hoof and horse health, blacksmith tools, working as a farrier, etc.), email or leave it in the comments below. Every month, we’ll pick one question to answer in our feature.