A quick Internet search on farriers, farrier schools, farrier websites and the like will demonstrate that “corrective shoeing” is a term that gets bandied about a lot. Almost every farrier says they can do it, almost every farrier school says that they teach it, and almost every farrier site has some kind of proviso on how misused the term is. As a horse owner, it’s hard to know exactly what’s being talked about when the words come up. Knowing the basics can help you to clarify what’s going to be done and what can be done if your horse needs some extra help in the hoof department.

What does it even mean? 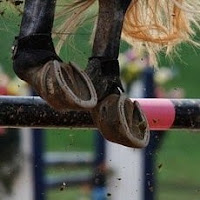 Corrective shoeing is a big blanket term that seems to refer to anything more than just the basics of putting on a regular, flat shoe. “Corrective” implies that the farrier is changing something about the horse for the better, but it’s not all that common to actually “correct” the horse. Rather than rely on this one super broad word to cover a variety of situations, many farriers (especially farrier-vets) have started to vary their phrasing in an effort to be more precise about what kind of shoeing is being done.

Some will use the term “therapeutic shoeing,” which refers, as the name suggests, to therapy—healing of some kind after an injury or a bout of disease. This could be rebuilding the hoof wall after a traumatic event or shoeing a horse with a bowed tendon. Also in use is the phrase “pathological shoeing,” which if used accurately suggests shoeing that addresses the causes and/or effects of diseases, like navicular. Kirk E. Adkins, farrier for UC Davis’ Veterinary Medicine Teaching Hospital, prefers the term “compensatory shoeing” when talking about shoeing that compensates for conformation or movement faults (but that doesn’t remove those faults in a lasting way), and “corrective shoeing” to mean shoeing that’s actually going to alter the horse and solve the problem that’s making the horse unsound. If your farrier or vet suggests corrective shoeing, it’s probably worthwhile asking exactly what they mean.

What can be corrected?

When the farrier is talking about actual permanent changes, it’s conformation faults that they’re usually trying to correct. There’s only a short amount of time in which these corrections can happen, i.e. when the horse is still growing. If there’s a physical defect like a limb deviation or an angular limb deformity, a farrier can help even out the wear and tear on the foot and support the leg enough that the foal can straighten itself out. Even then, it takes a careful eye to make sure that the wonkiness in a leg is due to an actual problem and isn’t, say, a rotational issue that will sort itself out over time.

Conformation faults are usually at the root of issues that corrective shoeing, as a loose term, tries to address. These can be faults that are only really a problem when the horse moves, like winging or paddling, or that are a 24/7 issue, like being over at the knee. Any deviation from normal that causes the horse’s foot to land off centre and wear down unevenly could be a candidate for more supportive shoeing to make the horse more comfortable. A good farrier will limit the things s/he’s trying to change to those issues that need fixing. Is your horse dishing like a swim champ but just finished his eighth season of competitive jumping soundly? The dishing is not a problem. On the other hand, if he keeps slicing open his opposite foreleg when he trots, it’s time to think about managing that action.

How does it work?

Just like in regular shoeing, balance is key. Your farrier will try to put the horse in alignment and make it easier for him to move. This might involve removing more foot from one side or the other, supporting the horse’s foot in a different way through special shoes or pads, or otherwise levelling out its weight-bearing surface with a different angle than the horse naturally wants to have. This is not an activity for the novice. The farrier has to balance not just the hoof, but the whole horse. S/he can change the way the horse breaks over its toe, make the horse move quicker in front (to minimize forging, for example) or make the leg arc straighter (to prevent it from interfering with the other legs).

Whatever changes are made to the foot have to take the whole leg into account, however. You can make a foot point forward, but if the rest of the leg doesn’t naturally point that way, there will be strain on other parts of the leg and potential damage to other structures higher up. The changes also have to be minor enough that the horse can adjust to them. A good farrier will come up with an individual plan to improve the comfort and function of a leg by ensuring that it’s adequately supported, doesn’t interfere with the other legs and is properly aligned relative to itself.

What can’t you fix?

There are a lot of (…let’s call them…) imperfections in movement that it would be risky to impossible to try to fix. In the end, the horse is limited by his conformation, and if you try to wrench things around too much, it can end in disaster. Tendons and ligaments don’t stretch so much, and adult bone doesn’t really remodel well. As a horse owner, it’s important to work with your vet as well as your farrier to determine where the actual source of the problem is. You might be able to make a warped and twisted leg more functional, but by sundown it will still be warped and twisted. Also, you can’t fix stupid. I’m sorry. There’s just no way.

Read more on this topic in Conformation and hoof health: How faults affect feet>>