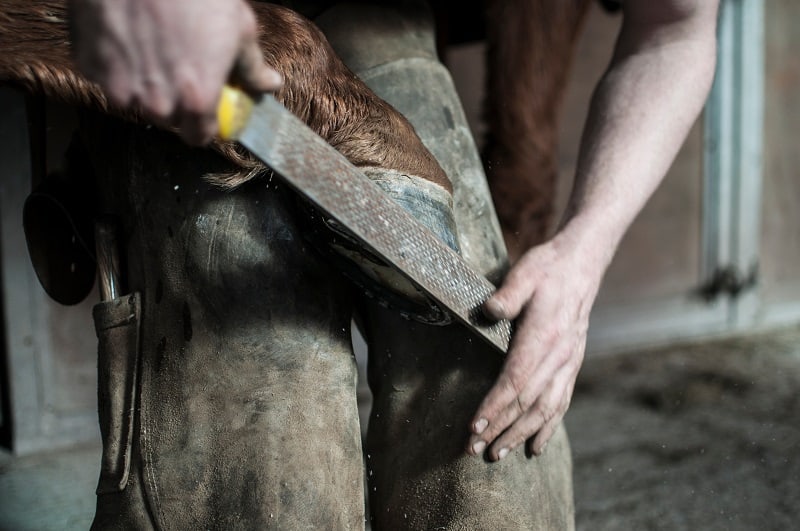 In a perfect world, a horse will have been schooled from day one to lift its feet up and set them down as requested, but we don’t live in that world. We live in a world where horses happy to rhythmically lift and place their feet on their ways to their paddocks become immovably rooted like sycamores when we need them to pick them up for the farrier. Or worse, whirl around like kickboxers breaking two by fours.

It can be anything from frustrating to dangerous to teach your horse to pick up its feet if that trick hasn’t been installed already. There are, however, some tricks of our own that we can use to teach our horses safely and kindly. 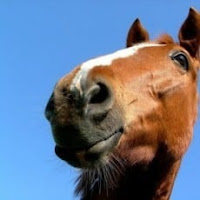 A horse that has no opinion about giving you its leg will lift it up if you stand next to it and push on it with your shoulder until it changes its balance to the opposite leg.

When it lifts its leg, stop pushing and reward it. Repeat this process a couple of times per training session, starting with your hand at the horse’s shoulder/hip but gradually moving down its leg each time until you can hold the foot. Your hand will support the leg and keep it off the ground, first for a second or two, but eventually for as long as you need.

It will take time for your horse to get accustomed to having one leg in the air, so be happy at first with just a few seconds.

If the horse picks the foot up but then leans it on you, let go for a second without dropping it (or drop the foot completely if the horse is really rude!), and then support again. Your farrier will thank you if the horse understands that it must keep its own foot in the air.

More often, a horse will have an opinion about giving you its leg. If its opinion is that giving you a leg is a terrible idea, you can change its mind in one of several ways.

If it pushes back when you push on it, see if a sudden shove on your part will cause it to take a step sideways. Reward and repeat until the horse gets the idea of lifting the leg, then proceed as above.

If no amount of shoving will move the animal, try walking it forward while you walk at the shoulder or hip. This is easier with a partner, but it can be done solo. Put the horse on a small circle around you and keep asking it to move over. Every time the horse lifts the leg you’re next to, reward. Keep a hand on its shoulder or hip and give it a light push just before that leg leaves the ground, so it will associate that cue with the activity of lifting the leg and the reward. Once it gets what you’re after, try it at the halt.

If the horse is willing to lift its leg up, but insists on flailing the leg around as violently as possible, don’t hang on to it. That’s not what you asked for. You asked for the horse to give you its leg politely. Let the leg go, then ask again. Start with short intervals and put the leg back down before the horse starts fidgeting so that you can reward it. Your chances of success will be much improved if your fire-breathing steed is a little tired out.

Some horses have strong opinions about holding up a foot. Which is fair—it’s a vulnerable position for a horse, especially if you add in ties, tools and a stranger who only comes once every six to eight weeks and smells like fire.

First isolate the problem, which might not be foot-lifting itself. If the problem is really foot-lifting plus the presence of tools, get the horse used to strange objects until it doesn’t feel so vulnerable when tools are around. If the horse hates feeling restrained on three legs, ground tie it until standing on three legs is no big deal. Solving the other issues so your horse can focus on one problem at a time will keep it from getting overwhelmed.

If the horse panics just because its leg is in the air, or if it’s learned that lashing out is the best way to get out of having to hold its leg in the air, you can change the horse’s mind by associating that activity with something pleasant. This takes some time, though.

If you have a 10-second window to hold up the horse’s foot until it loses its brains, start by holding for nine seconds, reward and then take it for a walk for a minute. Repeat for 9.5, 9.75, 10.05 seconds, etc., until it’s sure you won’t ask it for more than it thinks it can handle. Always put the leg down before it starts to panic and then let it move around to lower its tension levels.

In the worst case scenarios, you might have no seconds before the horse’s leg is flying violently through the air. This is when the trainer should arrive. If no trainer is available, and none of the above methods are even remotely working, you can try looping a leadline around the offending foot and keeping yourself out of harm’s way while it flails around. When the flailing stops, put the foot down, reward and repeat until the horse understands the task and you can risk transferring the leg from the leadline to your hand.

It’s exactly as difficult as it sounds. Especially since you can’t let go of the leadline until the flailing subsides, or else the horse will understand that it needs to kick harder in order to get rid of you. And that’s why there are professionals who do this.

Learn more about training your horse to work with a farrier in Stand Up! How to Train Your Horse to Stand for the Farrier>>