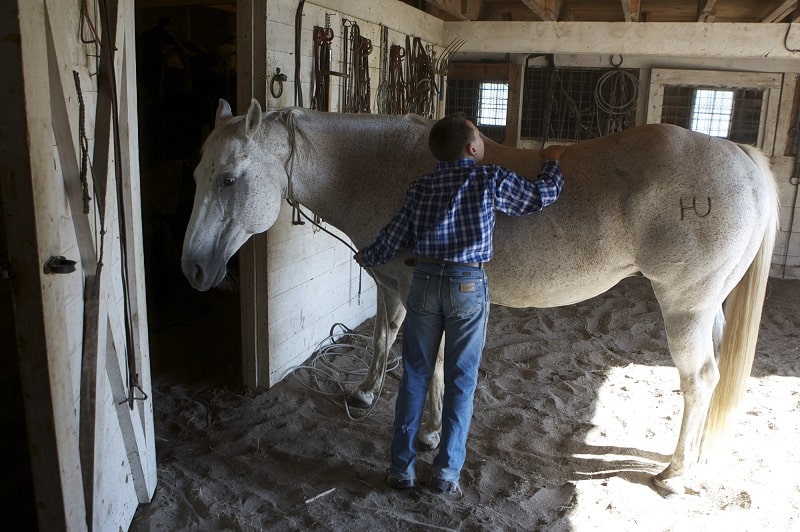 I am not a farrier, but my experiences with them suggests that nothing is more irritating to their existence than animals who won’t stand still and let them do their ever-loving jobs. There’s no better gift than teaching your young horse, or your older, flight-ready animal, to keep still long enough that the farrier can get in a trim. Here are some ideas about how to re/introduce the concept.

Your best chance to teach your horse to stand still will occur when your horse also wants to do some standing still. Since you can’t predict when this might happen naturally, you can create a situation where standing still sounds like a really good idea to your horse. If you have a baby or a flighty or ornery beast not prone to fits of standing peacefully in one spot, it’s often a better idea to make them a little tired before you ask them to do the difficult mental work of staying still. (Don’t laugh—that’s like calculus for some of them).

There’s nothing wrong with throwing the horse on a lunge line or in a round pen before you put it on the cross ties, especially if the lesson for that day is to stand still on the cross ties. There’s likewise no rule that says you have to go from field to barn to arena to barn to field. You can go straight into work from the field to take the edge off and get your horse in a head space where it can calmly accept staying put. Don’t worry about the mud—it’ll still be there for you to brush off when you’re done lunging.

Quit while you’re ahead

Babies and difficult horses have a shockingly low attention threshold, and in training them to stand, you’ll find you have a tiny, tiny window of opportunity to get things done before they lose their concentration and all hell breaks loose. The trick to training an animal to relax for 20 minutes while things are done to it is to start by asking it to relax for two. Or 20 seconds. Whatever you can get away with.

If the horse thinks it’s going to be trapped in one spot until the end of the day, it will panic. Horses have to build a tolerance for restraint, and if you start your re/training by making sure you take it out of the restraints (ties, stall, formidable grip on the lead rope, etc.) before panic sets in, it won’t associate being restrained with panic. Once it loses that association, you’ll be able to push your window open to three minutes, five, and so on up to whatever you need.

Needless to say, you should be working with the animal the whole time. Don’t walk away from it. If it seems like it’s about to lose its cool, take it for another walk or a lunge and then try again.

How still is “still?” 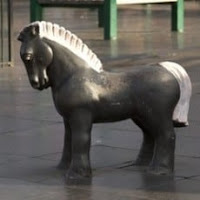 What you mean by “stand” is totally subjective. Everyone has their own level of strictness. The command is subjective, too. Some people use the word “stand” and some just drop the lead line as a cue. The main thing is to be consistent in the training. If “still” means still, as in no movement whatsoever, then you have to be prepared to intervene if the horse swings its head around. Intervention could be a short hiss or a light tap to get its attention back where it was, but the point will be to let the animal know that moving when unasked was the incorrect thing to do.

If “still” means that it can move its head around, but not move a foot, the same principle applies. You define the limits of what’s acceptable, and clearly tell the animal when it’s gone beyond them. The corrections shouldn’t be excessive, for more than the obvious reason. Acting like a stressed out aggressor won’t keep the animal from engaging flight mode and making your whole session useless.

If “still” means gentle meandering to you… I’m sorry. It just shouldn’t. Horses like things to be black and white. How is your horse supposed to tell when it can move and when it can’t if sometimes you discipline it and sometimes moving a foot is fine? It can’t is how.

Frequent rewards are also in order as a way to train positively. If the horse has stood motionless for 30 seconds, that likely deserves a pat. Allowing it to go for a short walk is another huge reward for its patience, especially when it’s just learning the concept.

When your faithful steed will stand for a reasonable amount of time, you can introduce the counterintuitive idea that it will have to keep standing when bizarre things happen around it. Again, starting small and in short sessions is key. You will probably have introduced brushes by this point (or should have. The horse should at least look good if it’s soaring through the air), but tools and strange sensations, like tapping on a hoof, can be gradually introduced once your horse gets the key concept that it should allow things to happen around it.

If your animal is really defensive, introduce things at its head and then move back slowly until it will allow objects to come in contact with its sides. Reward frequently—it’s a real measure of trust if the horse will let a tool get near its flank without kicking it.

As a safety note, always use a long object like a lead line or a long whip to get the horse used to feeling things on its back legs if you suspect its back legs might punch you in the face for trying to get near them. You can’t undo dead.