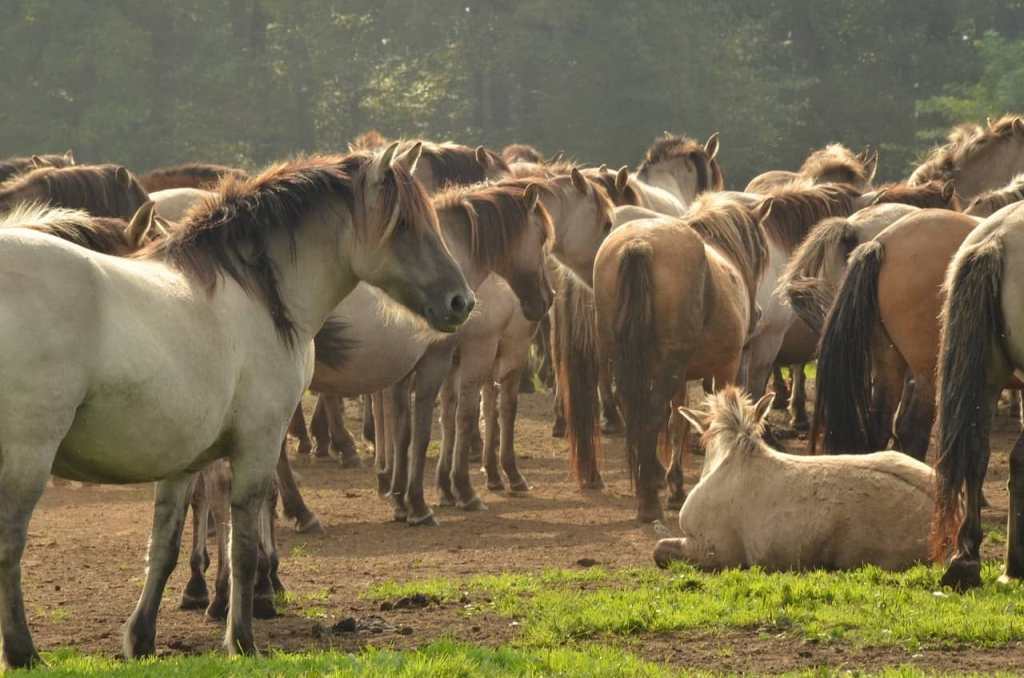 What Is a Horse?

Otherwise known by its scientific name of Equus caballus, the equine species is made up of four-legged mammals. Each has a large head with one eye on each side resting on top of a long neck, along with a broad body and tall, thin legs that support the body. The end of the body is protected by a long tail, and horses often use this to shoo flies away from themselves or their herdmates.

Being mammals, horses produce live young after an 11-month gestation period. A mare typically comes into heat a couple of weeks after giving birth. She doesn’t usually conceive on this cycle, however, as her body is still recovering from the birth. It’s common for mares to have one foal a year, and not to have another until the same time or a little later in the following year.

Horses are gregarious by nature. They’re used to company and find protection in groups of other horses known as herds. Horses are herbivores, which means they eat plant matter, not meat.

Horses are prey animals. In short, this means that they aren’t predators, but react with what’s known as a fight or flight reflex. This means that if they sense danger, their immediate response is to run away from it. Whole herds of horses will take off at a gallop if they sense a predator or another form of danger.

If a horse can’t run away from perceived danger, they’ll fight it any way they can. This may involve biting, striking or kicking out at the danger.

Have you ever come across a horse that’s backed into the corner of a yard or a stall within a stable? If they’re afraid and can’t get away, they’ll often resort to attacking the person who has them boxed in a corner. They’ll also do this if it’s not a person, but another horse.

Horses can make noises, including a snort coming through their nostrils or a nicker or whinny from their vocal cords. They may even stamp their feet quite loudly! When it comes to the majority of their communication, however, this is done through body language.

If a horse has both ears back, flat against its head, it’s warning something or someone—another horse or even a human. If this warning is ignored, it’ll often be followed with a kick or bite.

A horse that has one ear cocked behind its head is listening to something. If one ear is forward and the other is back, the horse is distracted and you don’t have its full attention. If the horse’s ears are drooping over the sides of its head, it’s very relaxed and sleepy, or is perhaps feeling unwell. A relaxed or resting horse may also have one hind leg cocked so that the toe is resting on the ground.

Did you know that a horse sleeps standing up? This fits with their fight or flight reflex: because they’re prey animals, they need to be ready to flee at the slightest sign of danger and standing allows for a quick getaway. A horse that sleeps prostrate must be very comfortable in its surroundings, exhausted or possibly ill.

Horses are able to sleep standing up because of the stay apparatus in their forelimbs. They each have a ligament known as the check ligament that’s found in the knee area. This locks into place, along with the annular ligament that runs down and around the fetlock joint of the horse.

It’s this stay apparatus that allows a horse to sleep standing up without requiring too much effort from the body. This also allows the horse to stay upright while resting, ready to flee if they perceive any sign of danger.

Horses range greatly in size. The smallest pony breed is the Falabella, and these ponies are typically seven hands high, or around 70 centimetres in height at the wither. On the other end of the scale, draught horses come in many breeds and can measure well over two metres in height at the wither. Many breeds, such as Arabians, Quarter Horses and Thoroughbreds, fall somewhere in the middle. These horses can measure around 14  to 16 hands in height, although some are smaller and some taller.

There are horses that are stocky in build, while others are very fine, and a horse’s build and height are often dependent on its breed and age. Most horses mature to their full height by five years of age, although many come very close to this at around two or three years of age.

Horses can live in a variety of environments. Though they’re more comfortable with cooler weather than hot, they can survive in desert environments, as the Arabian breed commonly does. Many live on vast plains where there’s plenty of room to run and ample grass to eat.

Horses are typically nomadic, travelling wherever food and water are available. Because they’ll eat for 12 to 20 hours a day, it isn’t uncommon for them to travel many kilometres (or miles) to be able to eat and drink enough to sustain their bodies.

Due to domestication, horses have learned to survive within fenced-off paddocks or pastures, in yards, or even within stalls inside stables or barns for 20 or more hours per day.

The most important aspects of life that must be in place for a horse to live comfortably include:

Horses are beautiful animals that come in an array of colours, builds and heights. In spite of this, they all need to be provided with a certain quality of life in order to live comfortably.

Knowing how to communicate with horses, read their body language and tend to their needs will go a long way when it comes to your ability to work with, care for and even own horses.