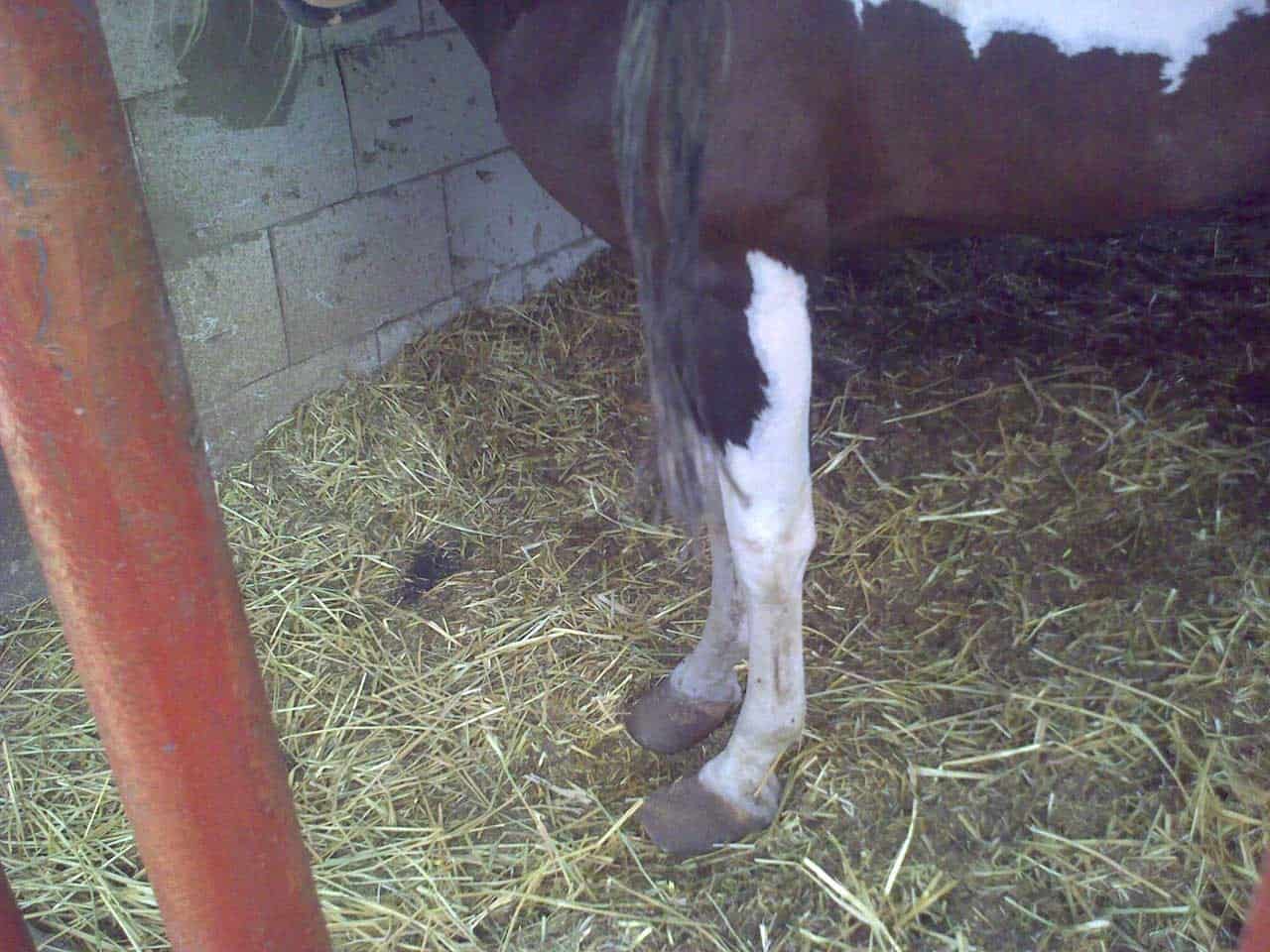 Laminitis is still one of the most common but least understood conditions affecting horses today. It can be mild or devastating, a one-time event or a chronic nightmare, a manageable concern or a career-ending (or life-ending) tragedy. Any horse or pony can suffer from laminitis and any feet can be affected. For owners and farriers, knowing as much as possible about it can make prevention and management much more effective.

Laminitis occurs as a result of a disruption of blood flow to the laminae of the feet. Think of the laminae like a sheet of velcro. They hold the distal phalanx (or coffin bone) in place by attaching it to the hoof wall. Without adequate blood flow these structures degrade. When they do, they lose their tight hold on the coffin bone, which becomes unstuck. The bone often rotates and may even sink, changing the anatomy of the foot altogether (i.e. founder).

What We Don’t Know 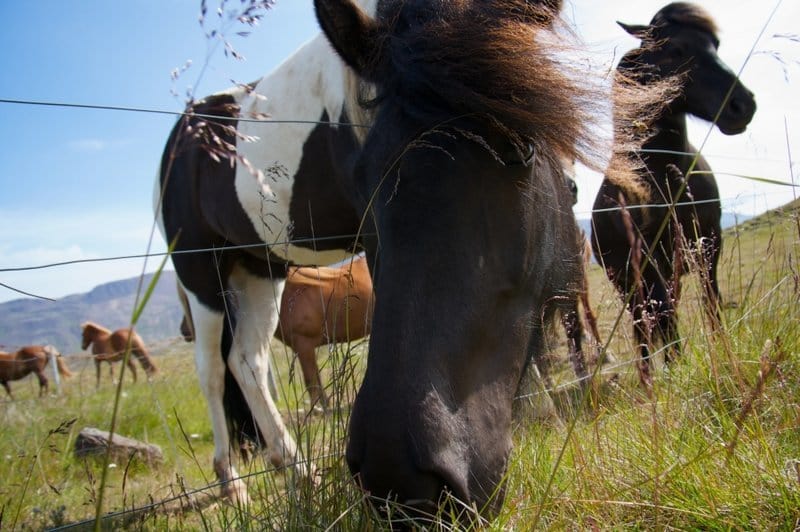 Researchers still aren’t entirely sure what causes laminitis. Any of the risk factors below could precede an episode of laminitis, or it could be the result of several factors combining. Some horses are exposed to all the risk factors below and never experience an episode. We don’t know the extent to which a predisposition for laminitis might be hereditary, or the role genetics might play in determining how a horse is likely to respond to an episode.

Although we think of it as a foot issue, laminitis is really an effect of an issue or series of issues that involve the whole horse. Despite not knowing exactly what mechanisms cause laminitis, veterinarians, scientists and horse people are usually on the same page about what factors put a horse at risk.

Over-Rich Feed. Rich pasture and/or too much grain provides horses with an excessive amount of soluble carbohydrates. It’s thought that this overloads the horse’s hindgut, which kills off intestinal bacteria, which release toxins, which affect blood supply to the feet. Horses who are obese and horses who have conditions that affect their ability to regulate insulin are particularly at risk.

Trauma. This can take a number of forms. Horses worked hard on hard surfaces, particularly unfit horses, are at a higher risk of developing laminitis. Similarly, horses who have injured or who are lame on one leg are at risk of foundering in the foot they’ve been compensating with. The theory is that when a horse’s normal weight bearing patterns are disrupted, blood supply to the feet is disrupted as well.

Stress. Work-related stresses and stresses on the immune system can play a role in the development of laminitis. This could be related to disease, changes in management, even vaccinations (although the good vaccinations do outweighs this potential risk and is almost always recommended by veterinarians).

Infection. Any condition that results in toxaemia, (essentially blood poisoning caused by toxins released by a bacterial infection), can lead to laminitis. One classic example is a retained placenta in broodmares, but other infections, or even serious colic attacks, can involve a heightened risk of laminitis. Veterinarian Robert A. Eustace notes that in addition to toxaemia caused by bacterial infections, “viral, plant, chemical and fungal toxins have been implicated” in cases of laminitis.

Thyroid and Pituitary Issues. Hypothyroidism seems to put horses at risk, which may or may not be related to the obesity factor. Cushing’s disease, associated with the pituitary gland, also predisposes horses to laminitis.

The signs of acute laminitis are often dramatic and specific. Horses will exhibit difficulty walking and may refuse to move at all. The digital pulse will increase, and the horse might adopt a “classic” founder stance, i.e. leaning back on its hind feet to put its weight on its heels rather than its toe.

That said, horses can suffer from low-grade founder and not exhibit any of the classic symptoms. They might be a touch lame for a few days, especially in spring or when turned out on grass. They might only be lame on hard surfaces or otherwise seem to have tender feet. Other signs to look out for could include changes in the white line and/or a susceptibility to white line disease.

In the acute phase, the vet should be called immediately. Because laminae don’t readily grow back, the first concern is to stop whatever is causing the changes in blood supply and minimize the damage to the hoof structures. The vet will likely want to administer anti-inflammatories and take x-rays to get an idea of how much the coffin bone has rotated. Some form of cryotherapy could be recommended.

Serious cases could require drilling into the wall of the hoof to remove built-up fluid and relieve pressure. In severe cases, where the phalanges of the foot have been pulled far out of alignment, the inferior check ligaments or deep digital flexor tendon may be surgically divided to reduce the pull on the coffin bone.

Cutting edge treatments are becoming more widely available. Veterinarians may opt to inject a deep flexor muscle with botox to paralyze it, which also weakens the tendon’s pull on the coffin bone. Stem cell therapy has been used as a method of repairing damaged laminae. There are also drugs in development that claim to stop the body’s inflammatory response.

Management will depend on the severity of the attack and the amount of damage done to the interior structures. The biggest key to success is to manage the factors that are suspected to have led to the laminitis in the first place. Restricting feed, for ex., is typically advised. The horse’s vet and farrier should work together to come up with a plan to correct the damage and keep the horse comfortable. Regular x-rays give vets and farriers their best shot at making sure their plan is working.

Owners should expect to see their farriers every 4-5 weeks so corrections can be made slowly and carefully. Therapeutic shoes should also be expected, but may not be necessary. Farriers typically use shoes or pads that help support the sole, heel and/or frog. That’s especially key in the early stages after a laminitis episode, when the horse’s toe is painful to walk on and pressure on it needs to be minimized. Wedges that reduce tension on the deep digital flexor tendon are also common. Farriers will need to work to keep the toe short and the breakover easy.

It’s possible for a horse to recover from an episode of laminitis and to return to full work, but careful management is critical. As with most things, owners, farriers and vets working together give a horse the best chance of success.