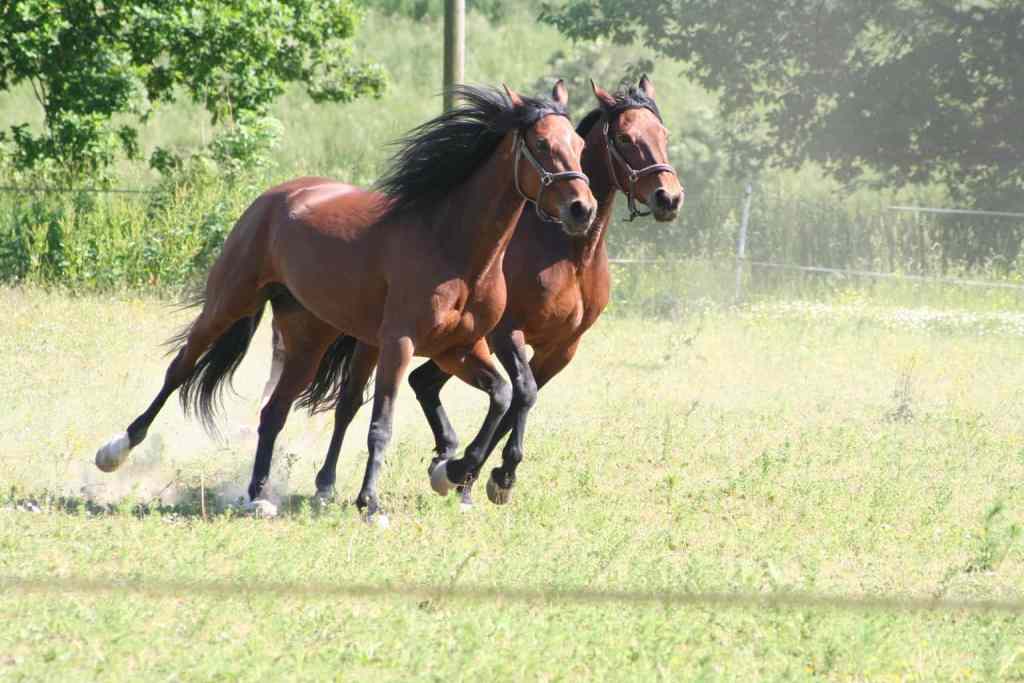 The act of breeding horses can be a lengthy one. Did you know that a mare is pregnant for more than 11 months? Her gestation lasts around 345 days, and it’s usually in the spring and summer months that she’s cycling and able to conceive.

For the person who plans to breed horses, it can be beneficial to know why you’d breed a mare, what happens during her reproductive cycle and what goes on during her pregnancy. And if you plan to be around for the birth of the foal, knowing what takes place during labour and what constitutes a healthy foal can also be beneficial.

Why Breed a Mare?

As noted before in regard to the management of the stallion, just because you have a horse that can reproduce, that doesn’t mean that it should. When someone’s choosing to breed a mare, they should seriously consider why they want to do so.

If the mare has a particular trait that the owner likes, one that could be passed on genetically, then this can be a good reason to breed. Perhaps her temperament is particularly agreeable and she’s been a valuable horse in this regard. Or her conformation has resulted in soundness for her job. Maybe the performance record of the mare has been noteworthy and she could pass this potential on to her progeny. Any of these reasons could be considered good reasons to breed a mare.

If a mare needs to have a long spell because of injury, this often isn’t a good reason to consider breeding. Unless, of course, the pregnancy wouldn’t further damage the horse and the horse was a good performer beforehand.

Although female horses are often identified as mares at four years of age, they haven’t completely finished growing and maturing at that age. It isn’t uncommon for people to breed 3-year-old horses, but most horses don’t stop growing until they’ve reached five years, and some continue growing until they’re even older. To ask a horse to support its own growth and to support a growing foal can be a big request. Therefore, you should also consider your mare’s age before considering breeding her.

It’s never a good idea to breed from a mare that has poor conformation or a bad temperament, or just didn’t perform well in the area they were asked to perform. These same poor qualities can be passed on to any progeny.

Good vs. Questionable Reasons for Breeding

Once it’s determined that a mare is suitable for breeding—and that she has good qualities to pass on—a stud manager, owner or veterinarian will need to determine if she’s cycling. This ascertains when she can be bred.

Horses are seasonal polyestrous breeders. In English, this means that they have many cycles at a particular time of the year. Often, these cycles occur during the warmer months, when there’s increased daylight, as these conditions help the mare cycle.

The mare’s reproductive cycle is typically 21 days in length, from one ovulation to the next. Within these 21 days, she’ll have a period of being in season (receptive to a stallion). During this time of being in heat, she’ll generally ovulate, and there’s a chance of conception if she’s bred to a stallion before ovulation.

Once the mare has ovulated, the burst follicle undergoes a change and produces a hormone known as progesterone.  This causes the mare to be unreceptive—even aggressive—towards a stallion. She can’t conceive at this time.

It isn’t until a hormone from the mare’s uterus, known as prostaglandin, is released that the progesterone levels drop and follicles start to grow and mature again. This results in a release of oestrogen and the mare showing signs of being interested in a stallion, and she’ll then go on to ovulate again. This cycle can continue throughout the spring and summer months if a mare isn’t bred.

If a mare is bred when in season and before she ovulates, then there’s a high chance of conception. The rate at which any given mare falls pregnant depends on the mare’s physical condition, how close she is to ovulation and the stallion’s fertility.

Once a mare has been bred and ovulated, it’s common practice for her to undergo a series of pregnancy tests. This is especially common in the thoroughbred racing industry, the performance industry and the Standardbred industry.

Veterinarians are able to see, via ultrasound, if a mare has ovulated. Around two weeks after this has occurred, the first pregnancy test will be carried out. Again, with an ultrasound, vets can determine if a mare is pregnant. This is known as the 15-day pregnancy test.

A second test is carried out at 30 days. If a mare is still pregnant (most pregnancy losses occur during the first 45 days, and are known as early embryonic losses), then it’s possible to see the heartbeat of the foetus on the ultrasound screen. A further test is done at 45 days, and if the mare is still pregnant, then this is when a client will be invoiced for the stallion’s service or breeding fee.

A Word on Twin Foals

It’s possible for horses to have twins, but not identical twins. The mare’s egg undergoes a physiological change when a sperm penetrates it. This causes no other sperm to be able to do the same. Consequently, if a mare has twins, this always results from two different ovulations.

That being said, mares typically struggle with carrying two foals to full gestational length. If a foal is born before 300 days, then its lungs won’t be sufficiently developed to support life. If it’s born before 320 days, other complications can arise.

In the thoroughbred racing industry, it’s illegal to register more than one foal from the same mare in a given year. Therefore, if a mare is found to be carrying twins via a pregnancy test—and this can easily be picked up on ultrasound—then generally, one of these pregnancies will be terminated. If this doesn’t occur, it isn’t uncommon for the mare to abort both foals later in the pregnancy. This can mean two dead foals and even a damaged mare, so for this reason, twin pregnancies aren’t often celebrated.

The Mare’s Due Date

Not all mares follow textbook gestations. They can have a shorter pregnancy than the typical 345 days, or a longer one. The pregnancy length is often described as 11 months plus a week, give or take 10 days.

To determine a mare’s due date for having a foal, there’s a simple formula that can be used, although it doesn’t take into account the varying number of days in each month. The rule is to use the mare’s date of breeding, minus one month, and then add a week and add a year.

Foal Heat in the Broodmare

Mares typically come back into season just 10 days after giving birth. Because of their long gestation, anyone who’s aiming for a foal each year must be mindful of how quickly they’ll need to get their mare pregnant again. If she misses her first cycle, it’ll be another 21 days before she’s able to be bred, and this could result in a foal being due at a later date in the following year. For those who breed to sell and race, an early foal is always preferred.

Usefulness and Care Are of Prime Importance

Evidently, there are many factors to consider when deciding whether to breed a mare. Whether the foal is going to be useful to someone in the future is of prime importance, as is the capability of the owner to look after the mare during her pregnancy.

Not all horses that are bred should go on to be bred from. However, for a mare that has finished growing, with correct conformation and a good performance record, the idea of producing a foal can be a good one.